When Flutter first opened there was an amazing piece of furniture that really piqued my interest. It was a red velvet couch, from around 1880 New Orleans, stuffed with down and incredibly comfortable, with carved chestnut feet and baroque scrolling across the spine. All of the wood had this soft glow, I just wanted to touch it all over. I couldn’t believe how old it was and how comfortable it was, and i wondered about their construction. I wonder how the making of velvet, or the dye process, has changed in the past hundred and thirty years. A little internet research revealed that in the 1800’s plant dyes, such as madder, were used to achieve a deep red color. Chemists also discovered that napthalene, a byproduct of coal combustion, closely resembled the red of madder. The color prussian blue, incidentally, came from cyanide compounds of the same origin.
Wood was easier to come by back then, and people were less precious with natural resources. Beautiful woods like American Chestnut, Mahogany, Rosewood and Black Walnut show up often in victorian pieces but they’re scarce and protected these days, arboreal leopards. Buying these things second-hand takes the naughtiness out, almost like buying a rabbit fur cape at a thrift store. It’s how I explain odd things that show up in the store, like a zebra skin tripod chair, or a velvet riding helmet with a fur bunny face on it. Deconstruction and reappropriation.
There’s an ancient couch at Flutter right now that’s like a cutaway illustration of victorian upholstery anatomy. Julia removed a layer of fabric to reveal its underpinnings and mechanics, its limbs and lingerie. The soft shine of the carved wood is the only thing dressy about it, like a nude with a pedicure. The first layer is fine gauge cream linen, held firmly in place with brass tacks. Underneath that is a kind of jute burlap, two layers which surround the centrally mysterious stuffing of the piece. After poking around, I concluded that the stuffing is made out of tightly coiled mats of sphagnum moss over a layer of horsehair. It is dense but springy despite the century it’s spent stuffed in there. 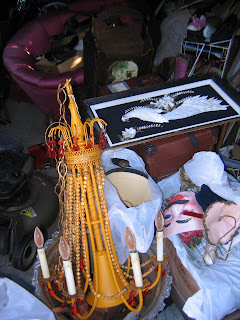 In the next few days, Cindy will be bringing in a lot of exciting new old things for fall. Here’s a few highlights….A 1930’s raspberry silk loveseat with sexy curves and fringe (totally hollywood glamour!), a 1930’s velvety green down filled sofa and an Eastlake Victorian mohair chaise lounge in deep red. A few silk upholstered armchairs, a ton of stuffed birds, a 1920’s illuminated light box eye exam chart and so much more! Cindy’s garage is looking pretty crazy right now with all the stuff she’s collected, it’s like a silk and velvet game of tetris. Flutter will be closed Wednesday so she can pack it full of gorgeous new things for fall.