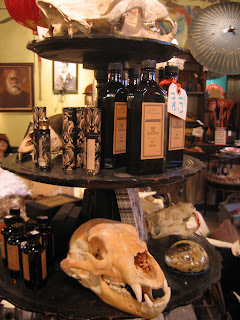 This weekend I made like the masses and drove out to Sauvie Island (as an aside, I figured out why so many people call it Souvies Island: apparently it was renamed Souvies in the 1850s but the name never was committed to print, and lives on only in Portland vernacular). It was super crowded out there, but gorgeous and clear-skied. The textures of the rolling fields, with their rows of berries and sprawling pumpkins, were best viewed from the tractor-pulled hay ride. I bought some little cucumbers for pickling and some dark red apples that are crisp white inside, delicious fairy-tale apples.
Last week I had a customer ask me to show her around the perfumes of Flutter. She said she was a little obsessed with perfume, so I asked her what fragrances she liked. She looked me in the eye and said “leather”, so I steered her away from the “fleurs petillant” and towards the wonderful Amber by Cote Bastide. It smells like an oak whiskey barrel full of oily black vanilla pods. We talked about Chandler Burr, the brilliant perfume writer for the New York Times, and physicist/critic Luca Turin, subject of Burr’s book “the Emperor of Scent”. Both of them write volumes about perfumes and the heady cloud of culture and innuendo surrounding them. I tend to agree with them about 60% of the time, and they have turned me on to some amazing olfactory works of art, yet they are generally unimpressed by one of my favorite scents, Samsara by Guerlain. Turin said it was “more notable for its absence of faults than for its qualities”. He just hasn’t smelled it on me yet. Anyone who hasn’t been to the Perfume House on Hawthorne should make a trip down there and just smell for hours. Don’t spray one on yourself until you find one that’s just right, and then ask the kind people there if they can make a little tester of it for you. Last time I was in there I got a sample of the pink hand-grenade Agent Provocateur perfume, and the amber by Prada. Any of the Guerlain fragrances are transformative, they sit in these gilded bottles like a row of archetypical femininity; like the greek goddesses. Jardins de Bagatelle is like Diana, woodsy and floral. Mitsouko is like Aphrodite, obscenely perfect rose and peach. I think Samsara would be like Hera: overly sensual and heady, demanding, maybe a little needy. Hmm.